Are you really serious, are amputations a trend or a fate? Are we looking for sympathy because we are amputated or is it we just think it will never happen to us?

If we want to start saving our feet we have to take responsibility for our own health and have respect for our feet. We hear the stories all too often of the amputations of the diabetic foot. It seems so easy to have your foot amputated but the question is why?

Just because you are diabetic does not mean you have to have an amputation.

We see amputations as a failure on everybody’s part and that includes the patient. But the question is do we take enough care of ourselves, our do we leave it to our doctors, Podiatrists etc?

In general I think that coming to terms with change is very difficult. Old habits are hard to die. When one considers the do’s and don’ts of diabetic foot care (see box) it is so simple, yet we do not do it. Over the last ten years I have noted most people are informed but are resistant to change. They think maybe it will never happen to them, until it is too late.

The key is admit you are diabetic, there is no such thing as a little diabetes or mild diabetes or a trace of diabetes you are either diabetic or you are not. Coming to terms first with that small detail goes a long way.

The earlier you are detected to be diabetic the better it is for your long term therapy and longevity. There is no reason you can not live with diabetes. Although we maybe talking about feet we still have to remember they are part of the body too and if your diabetes is poorly controlled and you get a problem with your foot it can make all the difference to whether you keep that foot or end up with an amputation so priority is control the diabetes.

When you look at the box and compare the do’s and the don’ts the don’ts far our number the do’s but in general if you stick to the main rules of thumb never ever ever ever walk barefooted and always check your feet every day, it can go a long way.

I have quite a few references I can share but if I were to draw on two with opposite outcomes. The first one which touched me as it was very recent and could have been avoided involves a lady in her sixties with diabetes and kidney disease who has been preached to a number of times all about the golden rules never ever walk barefooted, always check your feet and all the other rules. This lady was going outside and could not find her shoes so she quickly went outside barefooted. She got a puncture she did not know at first, she nursed it with the assistance of her husband and two days later her foot started to swell and as a result of her underlying complications had a rapid deterioration of the foot and leg which led to an amputation. What could we learn from this especially if we consider the box of rules?

Question: Was it fear that attention was not sought early enough? Was it just thoughtlessness??? It is a question I have not asked but going on track record if asked I will probably not be given a clear answer. The missing link, is always ghee I should have…, and there is usually the admission that it is their fault but by this time it is TOO LATE.

She now looks at many weeks in hospital, increased risk of problems with the other leg, recovery phase and learning to walk again first of all with a walker while the stump heals, frequent dressing changes then learning to walk with a prosthesis. And there are changes in lifestyle now for her, things like bathing become challenging at first, doing chores around the house, learning to at first be a little dependent on someone else, even down to type of clothes you may choose to wear the prosthesis has to be considered. Did I add that the prosthesis and time in hospital causes a challenge to your pocket too? What do you think? Does this sound familiar? I am sure it does.

After one amputation life goes on and the trials and tribulation of life are the same just more intense and challenging depending on the amputation that was sustained.

My second reference has a better outcome. This involves a diabetic gentleman in his late fifties with known complications of the eyes as a result of his diabetes, and neuropathy (unable to feel his feet), he happens to be an amputee (amputation of his toe not foot/leg). This gentleman recently moved house and was assisting moving an appliance which led to him tripping and falling. This fall resulted in a laceration to the underside of his second and third toes, with the laceration under his third toe being a lot deeper than that of the one under the second toe. As it was a laceration it bled but due to his eye disease did not see the bleeding until he examined his foot. I saw him approximately 28 hours later of which he was told off but if I had seen him 36 hours or more after he would have been in hospital. He had a swollen and mildly infected lesion. I collaborated with his very accommodating and understanding GP who saw him right away and followed the recommendation of the need for oral antibiotics. A week and a half later with the use of specialized redistributive dressings the laceration under the second toe healed and in three and a half weeks the third toe healed. He was instructed both by myself and the GP to have a very tight control on his diabetes, which he did with documentation. He was not hospitalized. What can we learn from this?

It is recognized that fear and in some cases failure to notice things early is what keeps a diabetic who encounters a problem from seeking care in the beginning but I hope you realize that fear and lack of early detection can lead to severe consequences and it is important that as a diabetic you establish that relationship with your GP and Podiatrist and are able to call them as soon as possible. 24 hours can make a big difference to the outcomes depending on the strain of bacteria you may have been infected and of course early detection goes a long way.

You the patient form the most important part of the diabetic foot care team and as you are with your self at all times you have the major responsibility of informing us and doing the right things. Simple lifestyle changes, diet (see your nutritionist) and exercise exercise exercise.

Control your diabetes in all aspects do not allow it to control you. Just because you are diabetic does not mean you have to have an amputation. 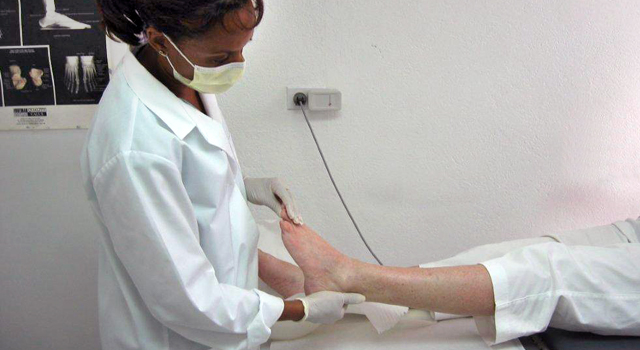